Where does your inner critic come from? 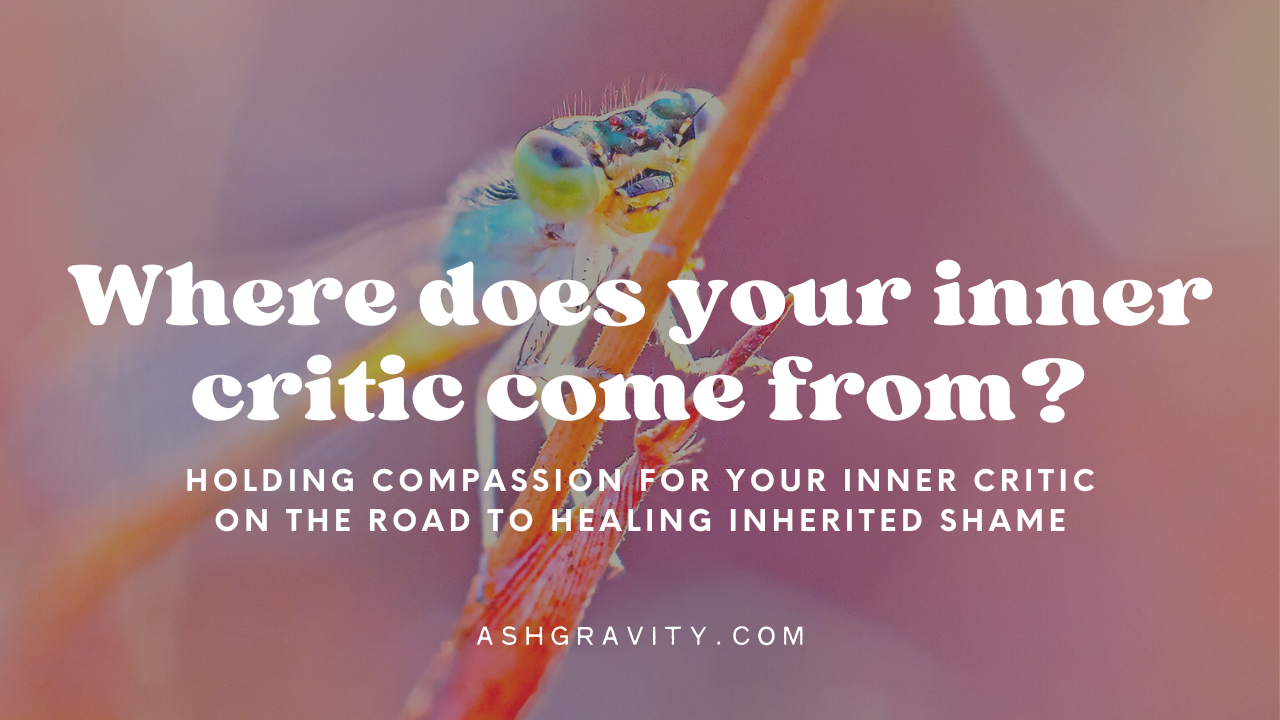 Over the last couples of weeks, I've been talking to my clients about their loudest inner critic. What do they look like? Do they have a name? Whose voice do they sound like?

Some people say that their inner critic is a green monster, while others say it is most certainly the voice of their mother—or the saddest, loneliest version of themselves.

One person said they thought of their inner critic as their inner capitalist and all of the conditioned beliefs they’ve received from capitalism, patriarchy and white supremacy.

I remember clearly when I first began to think of my inner critic this way. It was 2017, and I had just gotten out of a relationship. I decided to fill my time with socialist organizing and connecting with other people who were not so much focused on the internal deconditioning from capitalism, patriarchy and white supremacy—but on how we would change the political landscape of the United States through a collective deconditioning process.

It was an exciting time to be politically active and I threw myself completely into the work. Around this time I learned a lot about shame and vulnerability, thanks to the work of Brene Brown, and I could see clearly how capitalism, patriarchy, and white supremacy was fueled by individual and collective shame. I could see how, even though I was a lifelong feminist, I’d bought into the belief that I need to constantly improve myself through exercise, diet, productivity and more. I saw how my personal shame made me susceptible to the idea that I was a project that constantly needed work—and I could extend some compassion to myself because I wasn’t alone in this shame. Everyone had their own battle with shame.

As I saw the ways that I was conditioned to believe I was inherently broken, I also saw a dark side of myself. I saw how in my relationship I pushed these same beliefs onto my partner, telling her how to exercise, how she should spend her money, and how she should clean our room. I saw myself as the one who knew, and her as the one who didn’t know.

However on the flip side, I could see how she held me to the standard of a traditional masculine role within the relationship, expecting me to financially provide for both of us and repress my emotions.

We were both part of the problem, as is the case in relationships. We were reflecting the voices of our inner critics, each of your individual shames, onto each other.

It became clear to me that if I wanted to have healthy, vulnerable love in relationships, I was going to have to start by facing my inner critic.

Where did my inner critic come from?

As someone who has critiqued the greed of capitalism throughout my life, I definitely agree that it is inherently exploitative, unsustainable, and inhumane. I know that capitalism is fueled by hierarchies that give certain groups of people greater power and others less power. I have deeply believed in the narrative that if I just work hard enough I would be able to move from the bottom of the pyramid to the top—only at the price of my own humanity.

So you’re not going to get any pushback on capitalist critiques from me, and I still do believe that it is the source a tremendous amount of shame and inner criticism we face.

I work under the premise that we not only develop shame as a result of conditioning throughout our present lifetime, but that we inherit shame from our ancestors.

And, of course we inherit shame from our ancestors for so many reasons.

You can’t shift society from one model to another, without conditioning. Because what is conditioning exactly?

Conditioning is the process of training or accustoming a person or animal to behave in a certain way or to accept certain circumstances.

And, as I mentioned in the blog post on how to stop putting yourself last, some of the conditioning you receive is meant to protect you and keep you safe.

When my ancestors took part in the Agricultural Revolution, they were motivated by changing climate, stable access to food, and innovation that allowed for agriculture to begin. Today, we can see the genetic imprint of this transition that took place 12,000+ years ago in our own bodies.

For example: “[g]enetic studies show that goats and other livestock accompanied the westward spread of agriculture into Europe, helping to revolutionize Stone Age society. While the extent to which farmers themselves migrated west remains a subject of debate, the dramatic impact of dairy farming on Europeans is clearly stamped in their DNA. Prior to the arrival of domestic cattle in Europe, prehistoric populations weren’t able to stomach raw cow milk. But at some point during the spread of farming into southeastern Europe, a mutation occurred for lactose tolerance that increased in frequency through natural selection thanks to the nourishing benefits of milk. Judging from the prevalence of the milk-drinking gene in Europeans today—as high as 90 percent in populations of northern countries such as Sweden—the vast majority are descended from cow herders.” — National Geographic

We, as humans, are embodied history. 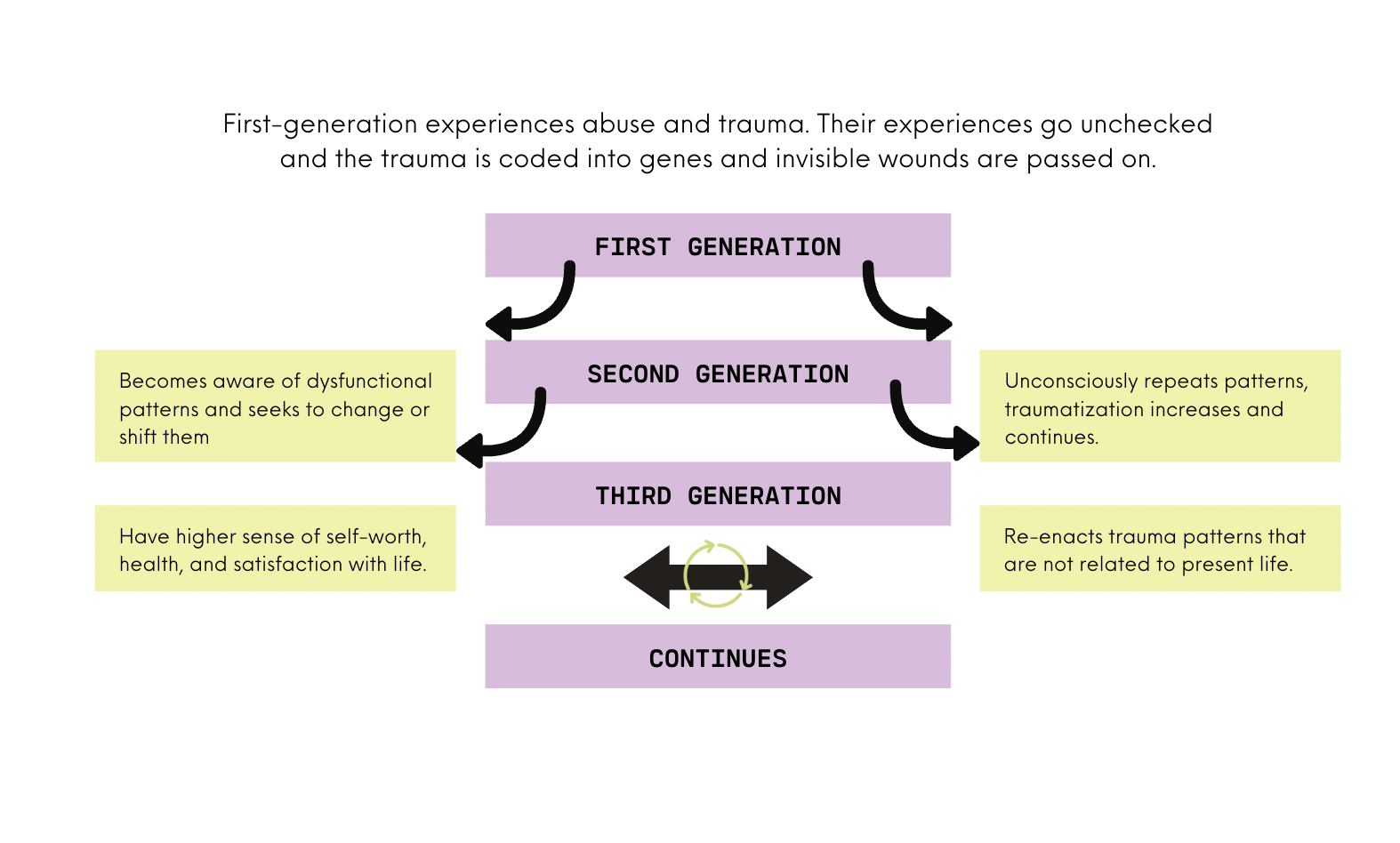 It is an ancient Haudenosaunee principle that in order to make a decision, the impact seven generations from now must be considered. Coming from an environmental background, I often saw this principle used to encourage people to consider the impact our decisions today would have on the future.

And how was she shaped by the world? What did her life look like? Where did she come from? Do you know?

As one of my favorite books tells us: this pattern didn’t start with you.

In fact, this pattern didn’t start with your mom.

These patterns are the result of lifetimes of conditioning that we are collectively waking up to.

Your inner critic is a result of these lifetimes of conditioning.

Revisioning the Future Through Deconditioning

That can all feel a little overwhelming to people—and if you’re feeling that I want to invite you into a reframe.

Sometimes the shame we inherit is what actually leads us to recognizing the gift that we have.

You don’t have anything that you need to prove.

Your belief that you have something to prove is rooted in your inherited shame.

In my own life, one of my greatest motivators for working in the environmental movement was the shame I felt about coming from a family that used pesticides on their farm. I felt that the only way to right the wrong of my family using these harmful chemicals that permanently damaged ecosystems was to become a devoted and dedicated environmentalist.

Since environmental sustainability was my guiding value, I measured everything in my life against how sustainable it was. Rather than getting a job in banking, I would get a job working for The Nature Conservancy. Rather than driving to work, I would walk or ride my bike. Rather than ordering a cheeseburger, I would order a veggie burger. Rather than taking pharmaceutical drugs, I would focus on holistic medicine. Rather than using plastic sacks at the grocery store I would bring my own or use no bag at all.

And when the habits I acquired in the name of sustainability weren’t sustainable for me, I would make it a personal failure. I just needed to try harder. If I had to throw away a plastic bottle because there wasn’t a recycling can—well I wouldn’t. I would just carry it home with me. And if my friend threw hers away—well then she wasn’t trying hard enough!

In order to protect the part of me that felt so much shame for existing on planet Earth, coming from a family that had done so much harm (in my eyes), I had to become the most environmentally righteous person who ever existed.

I would be virtuous.

Except my way of being virtuous had nothing to do with religion. But the conditioning to judge other people based on my own moral superiority was just the same.

Expanding Our Vision of What’s Possible

It took me nearly twenty years to recognize that the way I approached environmental activism had a lot less to do with my desire to help the planet and a lot more to do with my inherited desire to be morally superior.

And what really shifted my perspective was when I stopped focusing entirely on what climate activists were telling me about why I was responsible for the pain of the planet and I started to connect directly to Nature myself.

And to be honest, those were not things I had never made a very high priority. Because my inner critic told me I didn’t deserve them. How I could I experience joy on a dying planet?

Today I am still passionate about the Earth. I know that climate change is real. I also know that I am not a martyr for the planet. And I believe that true sustainability is more about people and what we expect. It’s about the way we treat each other like commodities, often, because we see ourselves the same way.

Our own inner work is required to change this.

This is where my work inside Ancestral Transformation Guided Journey really speaks to the process of decoupling with your inherited conditioning.

The map to your embodied history is right there in your chart—and it’s the same map you can use as a guide for healing.

But learning to read your own chart can take years, and learning the Cycle Breaking Astrology methods I use can take even more time than that.

So I want to share with you the same experience that shifted the way I saw myself, allowed me to find compassion for my inner critic, and commit to a new path of healing: Building a direct relationship to Nature for guidance.

I’m inviting you to attend the Earth Ancestor Reunion, which you can watch whenever it is aligned for you here. The current pricing for this program will expire on Sunday, October 9.