How to Develop and Trust Your Intuition 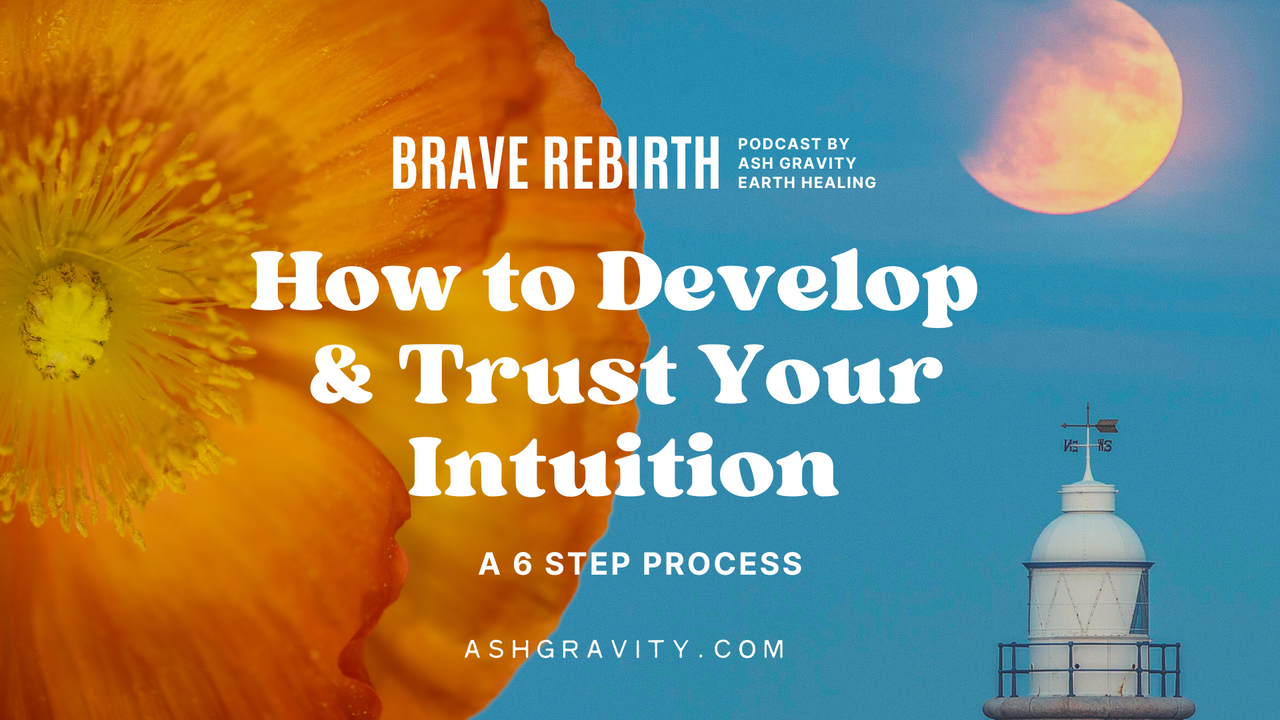 During this eclipse season I've been writing about being in a place where you feel that call to go deeper within yourself. Maybe it's as a result of some circumstances in your life that have put you into a position where you have to do some healing work on yourself.

I think of these times as going to the basement, because that's often where I literally find myself. For example, at one point I broke my hand and become unemployed, so I had to move in to my parents' basement. It was a very humbling experience, if you've ever had to move into your parents house or move into your parents basement, then you understand what I'm talking about. I felt grateful to have the security and option, but also really did not want to be there. While I was living in this basement, I was coming out of some experiences that were very difficult, very traumatic, including a divorce, a sexual trauma, healing my relationship with food, and coming out as a lesbian. I was had to really get real and honest with myself about what it was that I wanted for my life. I was also coming out of a period where I'd been getting by with less than what I really needed. I had to go within myself and understand more about why is that I was doing what I was doing. This is something that I think a lot of people don't actually spend time really reflecting on or thinking about. Why do you do the things that you do, and how might you do them differently?

Some of my belief that this is something that people don't really spend time reflecting on is probably an observation from the culture that I grew up in. The predominant culture was definitely one where you didn't question your parents. It was definitely normalized that if you are a full grown adult, there are things that you would hide from your parents, or be ashamed to tell your parents. I'm not talking about like, things that would maybe be normally private, but things like, "Oh, I have plans to go out for dinner this weekend." Because you definitely wouldn't want people to know that you were the kind of person who spent money to go out to dinner.  We all have stuff like that from our families are in the culture that we grew up in, where there's just ways of acting that are normalized. You observe these things that other people do throughout your life and then you do those things as well. You don't necessarily stop to question.

Going Into the Basement

Usually when you end up in these places where you are, living with your parent, for example, or you're in a situation where you feel like you are at square one—there isn't necessarily any real blueprint for how to move forward. It invites you to say, "Well, I don't necessarily have to do things the way that I was doing them before, I have the option to do them differently."

But also, you might find that you didn't necessarily intend to end up in this specific place that you have ended up. You might question if you took a wrong turn somewhere.

Reconnecting to Your Intuition

Moments like this are so perfectly primed for getting clear on why you made the decisions that you made in the past. You made the best decision you could with the information you had at the time—and also your decisions were informed by the values and expectations you observed from the people around you when you were growing up.

The reason why they believed developing and trusting their intuition was important was this: It would help them make better decisions. They would spend more time trusting themselves and less time second guessing themselves.

I totally understand this practical desire for developing your intuition, because, honestly, that was the same reason that I wanted to develop my intuition several years ago.

I was in a moment where I was at the beginning of a new chapter in my life. I had some intuitive pings that led up to making some decisions that would take me into a totally different direction of my life (getting divorced, leaving my career I'd worked very hard for).

After you experience a really big change in your life, particularly as an adult, you're experiencing a disruption to any sense of stability you created. It makes sense that part of what you desire is to make different decisions than you did in the past. Because I mean, if you're going through a major life change, and you're an adult, it can be quite challenging because you feel sort of lost and confused. You're not exactly sure what to expect. You feel like you don't know what's going on. I think that a lot of us still carry this belief that like adults should know what's going on, which is hilarious, because no adult that I know ever really knows what's going on. But there's that desire for control and that desire to trust your intuition enough that you feel a sense of control.

There is a desire to use your intuition and have faith that your choices and your decisions are the right decisions.

I do think it's possible to get to that point. I think that it's normal to second guess yourself and to doubt yourself and I think it's really healthy actually, to second guess yourself and doubt yourself in the process of exploring and discovering what's real. I think it's good to see things outside of ourselves to validate our own internal knowing. But I also know that some people have a tendency to go too far in that direction, where they constantly feel the need to have other people validate what they already know within themselves. Or they don't even really know what it is that they want, or what it is that they need, or what it is that they feel. They look to other people to tell them that. This is something that so many people experience, and so many people feel, yet so many people have tremendous shame around this feeling.

Release Yourself from Cultural Codependency

The reality is that so many people resonate with this experience, and it is a natural outcome of the culture that is widely accepted of self sacrifice. Sacrificing yourself for religion, family, job, partner, spouse, kids. Sacrifice is something that is held up as being something that is of high value in many, many cultures. It makes sense that people have a tendency to sacrifice themselves, their needs, and their ability to listen to and connect with their inner voice. Because often, when you do listen to your intuition, your intuition might lead you in the direction that is taking you towards a place where you're not going to be accepted by this group of people anymore. Even from an evolutionary perspective, you want stability, safety and security. You're not going to want to listen to your intuition because that's going to take you away from these primal needs that you have. But in following your intuition, you may find different ways to get those needs met.

So in a sense, learning how to trust your intuition more and developing your intuition does help you make more aligned decisions for yourself. That can save you time, because it can take you away from constantly worrying about how you'll be perceived, and take you closer to having faith in what you know about yourself and your needs. And if other people disagree with it, that's okay.

This kind of practical lens of developing our intuition to move past the cultural codependency that a lot of us have witnessed is extremely powerful.

That's exactly what I wanted years ago when I began developing my intuition.

Which is why I created A Guide to Intuition! ⬇️ 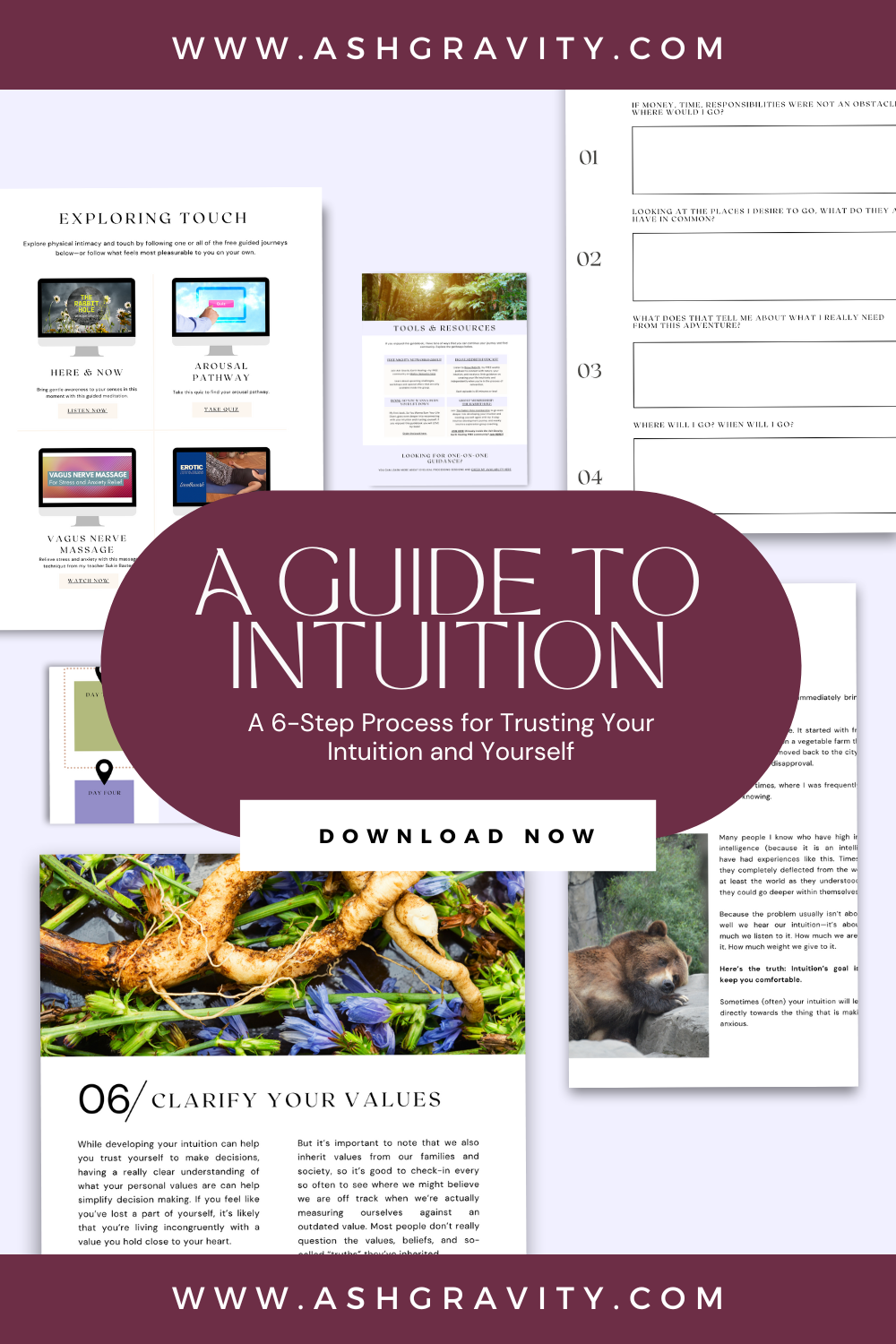 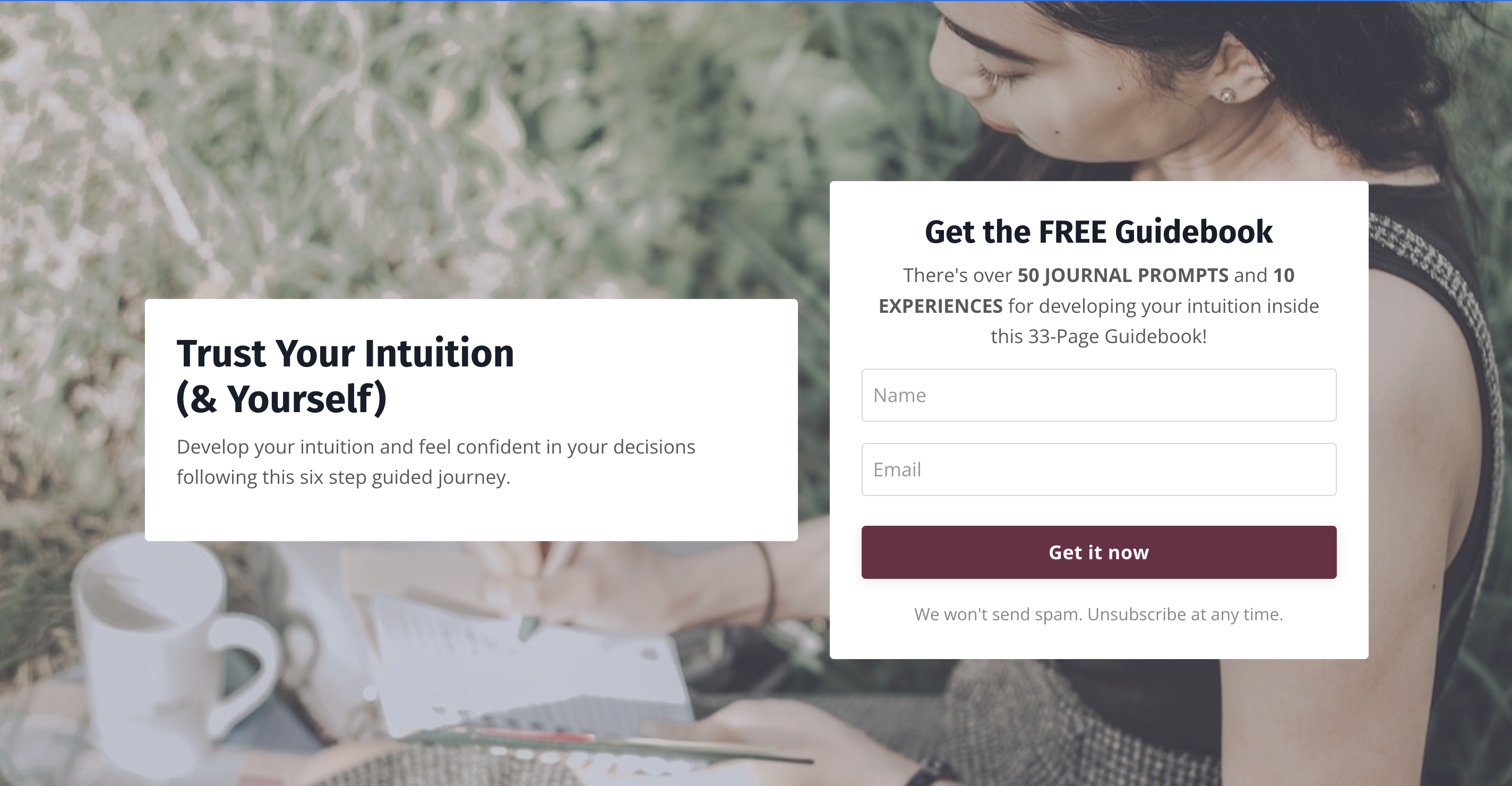