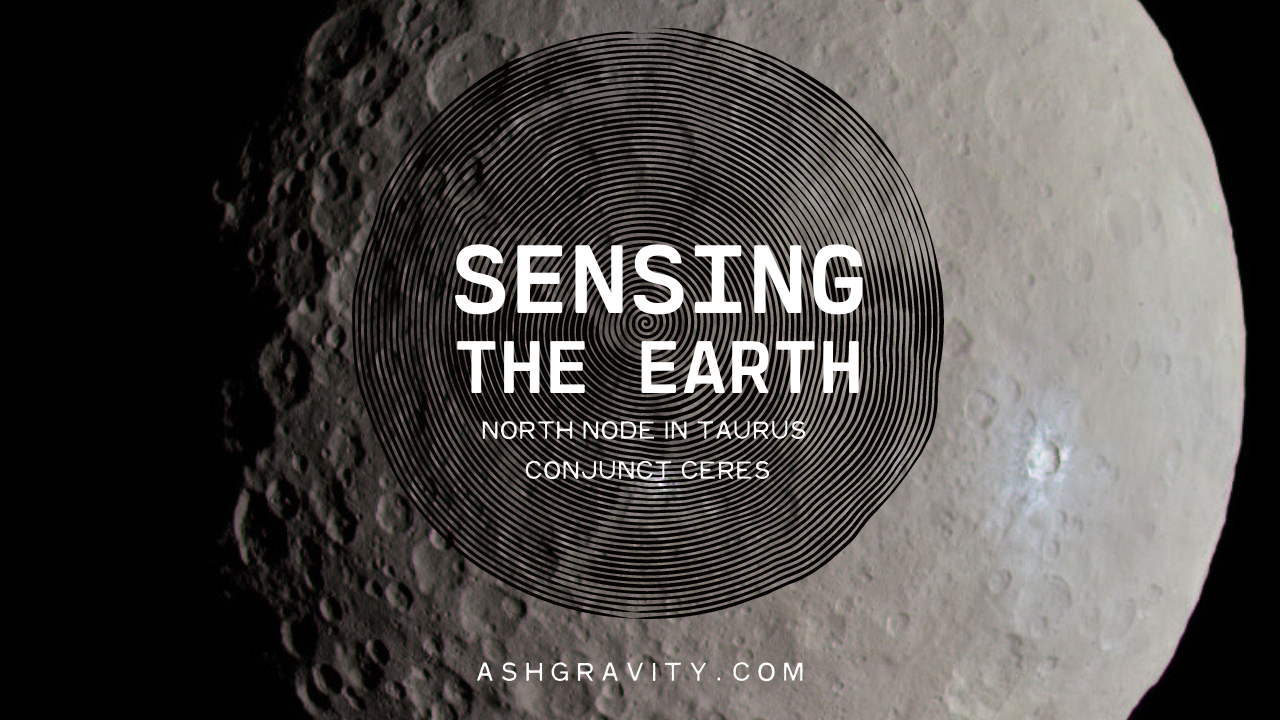 At the very beginning of this collective journey, we find the North Node synced with the dwarf planet Ceres, which is named after the Roman goddess of agriculture and motherly relationships. Taurus has a strong relationship with the Earth in its fixed state, which can be rocks, boulders, and immovable roots. In its relationship to the throat, Taurus also speaks to the way plants communicate.

Taurus is sensual. Taurus loves to smell, to taste, to see and hold with their hands. Taurus values what is tangible and real.

With Ceres aligned with the North Node right at the beginning of this journey I think about warm cookies coming out of a grandmother’s oven straight into the hands of her grandchildren. The smell of the house. The crumble of the cookie.

Ceres will exit Taurus on February 8, after making her way through the sign from May 8-July 31, 2021 and December 21, 2021-February 8, 2022. Ceres' entrance and exit from Taurus has aligned with announcements related to climate change, including the sixth warmest May on record, the sixth hottest year on record, and the tightest ever auto pollution rules released by the EPA.

While the economic ties to Taurus are abundantly clear as the North Node enters this sign and news about inflation the economy are everywhere, there is no doubt that conversation around land, land ownership, digital land, and the environment will be a major focus of the next year and a half. What does it mean to own? What does it mean to hold ownership?

In reality, who *owns* land has been a driving force of capitalism since the inception of the concept of land ownership. How can we further disentangle ourselves from our attachment to land ownership in the next two years?

On the other side we have the South Node in Scorpio. Scorpio is also very sensual, but in a different way. Scorpio does sense what is hidden and trusts more what can’t be seen. The South Node in Scorpio might reveal secrets. For those who choose to take the invitation, it could connect us deeper into the past. It could deepen our relationship to our ancestors, to the other side, to the possibilities of what else might be out there.

If I could give one piece of guidance as we enter this narrative, it would be to keep your voice steady but your throat and shoulders flexible. To not become too rigid and attached to one way of seeing the world.

I really believe that we all need to deepen our connection to the Spirit and Spirits of the Earth and to listen to their messages. To open our hearts to receive more about how they would like us to move forward and not be so convinced that our human brains have all of the answers about what is right and how the Earth must be saved. In fact, I would say that we need to let go of the idea that we as humans have the ability or right to save anything.

Maybe we are the ones who need saving, and the answers are out there for us to receive if we only listen. Maybe instead of approaching the Earth as a savior with a set of tools, we need to more deeply understand the Earth's own regenerative processes and be in relationship to support them.