How My Saturn Return Changed My Relationship and Career 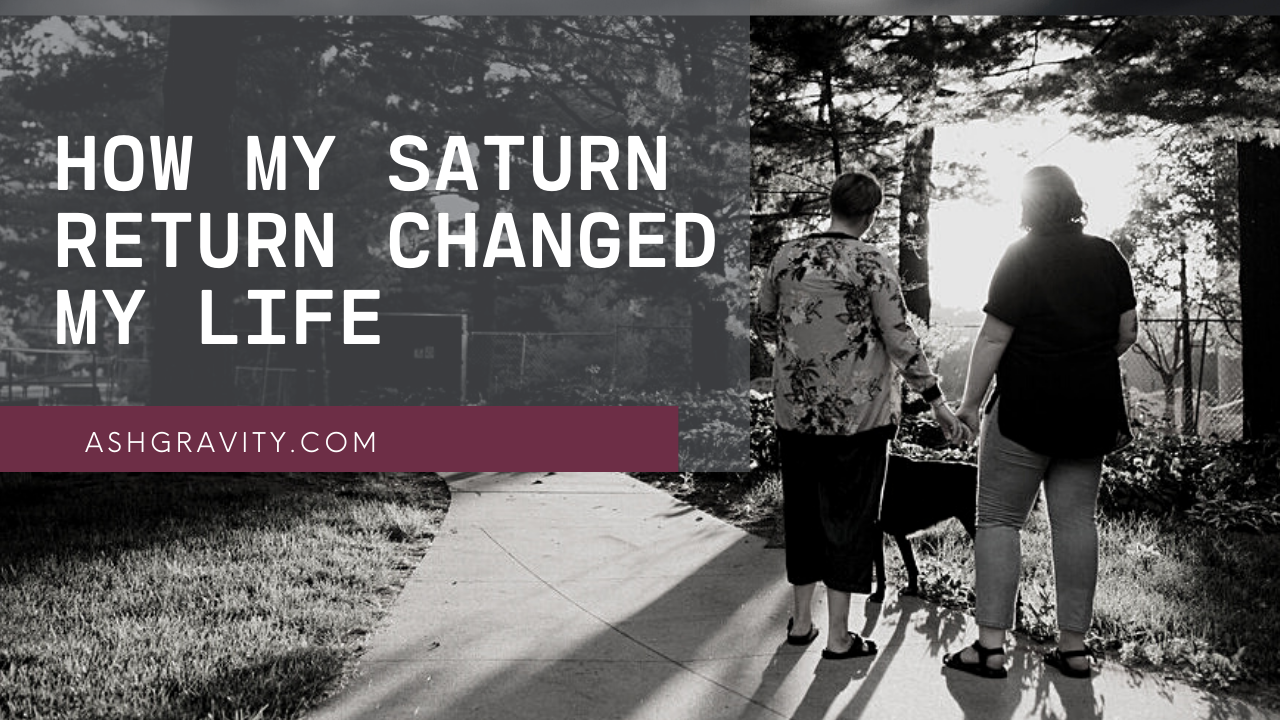 Marti was sitting at the foot of our 100 year old staircase and I was standing in the doorway of our front entry way, arms crossed over my stomach, explaining what was happening to us. Marti had spent the day stripping paint and ripping up old linoleum. We were standing in a literal mess of layers peeled back. ⁠ ⁠

“It’s Saturn,” I said. Which was simplistic. But it was also honest. “We’re triggering each other.” ⁠ ⁠

“We talk about what’s going on with us.” ⁠ ⁠

we were going through our saturn returns together

It takes ~29.5 years for Saturn to return to the same position it was at the time you were born. This is often a period of change, upheaval, commitment—big life stuff. If you’re lucky like me, you get to go through it with someone else. ⁠ ⁠ My someone else is my partner, Marti.

The linoleum and the paint wasn't the only thing getting peeled back. We were both struggling through trauma accumulated from childhood, being queer, and living in capitalism. We knew if we didn't talk openly about how we were experiencing our intense emotions during this time we would not last. ⁠ ⁠

At the beginning of our Saturn return we moved to Mount Vernon, Iowa, a town of 4,400 from Des Moines. Before we moved, when I looked at the astrology I knew it would not be an easy year. I thought there was a strong possibility that our relationship might not last. I felt like I had clear messages and simultaneously no clue what I was doing. ⁠ ⁠

What happened instead was that many long career relationships ended, while Marti and I became more deeply committed. Astrology gave us the language we needed to keep our relationship going through extremely challenging times of personal growth.

Saturn and Pluto in 2019 taught me over and over again that what is meant to stay will stay.

standing together through deep destruction

Saturn was within 9 degrees of Pluto at the beginning of 2019, and by the time May rolled around they were retrograde and conjunct between 20-23 degrees Capricorn. My own Sun is at 20 degrees Capricorn and I have a stellium with Mercury, Neptune and Uranus in Capricorn, so I was heavily impacted by this.

While the Saturn Pluto conjunction was not exact until January 12, 2020, we were lucky enough to catch a glimpse of it around May 21, 2019.

The best way I can describe the feeling of this transit was slow, heavy and painstaking. It was like walking around with cotton ball in my ears. I contemplated death regularly. Both my own, the death of others, and the death of nationalism.

Around May 21, 2019, when Saturn and Pluto were at their closest conjunction, my grandmother died. I was already in a bad state by the time she died, because the previous day I found out that a promotion I’d been working towards for over a year would not go to me. Due to a technical (read: human) error, I discovered this news on my own rather than through a personal notification, even though I worked for an organization of less than five people.

Uranus in Taurus was transiting my 11th house of networks and Venus made a conjunction to Uranus around this time. I received unexpected news that forced me to leave an organization that had strongly shaped my feminist beliefs and boundaries, as well as my larger social network.

I decided immediately that I would leave the organization I worked for, which felt like leaving behind a family. The process went on for nearly six weeks. Mars in Cancer was also transiting my 1st house for this entire six week period, forcing me to assert myself and making me very uncomfortable in the process.

The day after I left my full-time job, Andrea at Kae Apothecary let me know that she was looking for a new person to teach astrology workshops and do readings. I was hesitant, but the timing also was not lost on me. It was clear that astrology, which I’d been obsessively working on in private for years, needed to take center stage in my life.

I still felt certain that I needed to choose a more practical route, and I also needed to work through my shame around being an astrologer and tarot reader. I’d worked in agriculture for ten years because my father is a farmer and I was passionate about the future of farming in the United States. Most recently I was training women in agriculture to run for office and speak on behalf of causes they cared about. It was rewarding work, but at odds with my passion for astrology.

As a teenager I was serious and practical and always rolled my eyes at the metaphysical books my mother hid around the house. I never imagined that my career would take me in that direction.

I launched a freelance marketing business before leaving my job, but after the Solar Eclipse at 10 degrees Cancer happened on July 2, I had already decided I didn’t care about it. Most of July was spent in a state of panic, confusion and disbelief as I tried to figure out what I would do next.

A little luck and relief came on July 24, when I taught my first astrology workshop and started working part-time at Kae Apothecary. On August 3, Marti and I opened Thistle’s Summit Bed and Breakfast, and by August 8, I was doing astrology readings out of our business.

It seems really simple when I write it out like that, but of course it was not. I needed to grieve for quite awhile, and it really wasn’t until Mars entered Scorpio on November 19 that I realized what I had unintentionally done. I made a more concrete space in our house to give readings and built a structure to support my work.

Looking ahead to the Saturn Pluto conjunction on January 12 (two days after my birthday) I know that what’s been cut away was not meant for me, and while the experience of those deaths was painful I have ultimately gained freedom.